I’m for the Eddie Izzard approach to speaking new languages – just get on and do it.  In public.  Trouble is, many of us educated in the “Don’t open your mouth until you get your endings & subjunctives right!” school find it mighty hard.  The day of multilingual blogging stirred up latent performance anxiety on my part, not hugely assuaged by a number of folk blogging competently in not just one foreign language, but three or four!

It’s also an Anglophone thing – we don’t often find ourselves in formal settings abroad where English isn’t spoken, so the drive to be understood is less intense.  Jacob Christensen’s post astonished me –

As you have probably noted, this is (usually) a blog written by a Dane in English.

This is slightly ironic as I am rather sceptical of the trend to equate “international” with “English”, something which has led to almost any other language than English to disappear in the Danish educational system – French, German, even Swedish are going the way of the Dodo.

When Scandinavians meet these days, they tend to speak English even though the national languages hardly differ more than the dialects within each country. (If you don’t believe me, try listening to a Swede speaking Skånska or, even better, a Norwegian speaking the dialect from the Bergen area).

I also liked the bobbles – å – in his Danish (oops) Swedish version.  What do they do to the sound or meaning?

Add to that the British/Commonwealth thing – English is widely used in the UK’s old colonies, including of course the USA, so there are numerous countries we can visit without a phrase book. 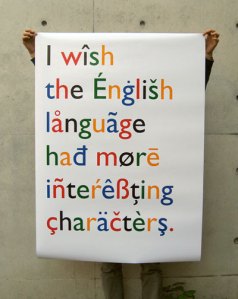 Reading the fluent multilingual blogs yesterday (and bravo to the British Council, EC London and UK FCO folk Thom Reilly & David Lidington for joining in), I wondered – is there a gap between those who move easily between two or more languages (and cultures) and those who do not?  Is it just people who’ve worked abroad who manage it?

Apart from friends who have settled in the UK from another country, in the grassroots work I do I rarely hear Anglophone Londoners speaking any other language.   The only time I speak French (or Hindi) is when giving directions to visitors on the street.  The only meetings I have attended with simultaneous interpretation have been in Paris and Switzerland.  I guess some of us are in between – pretty incompetent at our one or two extra languages, but able to get by and interested in communicating across boundaries; linguistic boundaries – but often the accompanying religious and cultural ones, too.

The boundaries we seek to lower are sometimes only between us and next door.  My British friends originally from Pakistan speak Urdu socially, at home and in the mosque – and English at school, work and in the “public square”.  Understanding a bit of Urdu, a bit about Islam and enjoying a hot biryani means the relationship isn’t restricted to formal life – we can be friends as well.

My immediate neighbours in London include three Albanian men, a family from Sierra Leone, a Kosovar and an extended Irish family.  Over 141 languages are spoken in my part of town.  Portuguese, Yoruba, Spanish, Somali, French and Twi are, in order, the languages most spoken at home (after English) by local schoolchildren.  This reflects the significant number of families from Madeira, Brazil, Nigeria, Ghana, Somalia and North Africa, Columbia and other Spanish-speaking parts of South America.  If I lived in another area, it could be Bengali, or Punjabi or Polish.  Inner London is incredibly multilingual – how come we Anglophones are so tongue-tied?

It has knock-on effects, too – Martin Kettle had a good piece in the Guardian last month –

It is hard to recall a time when the national, not just the London, mind was less informed about or engaged with Europe than it is today.

Europe may still be this country’s major export market. Millions may still take holidays there. Our football teams may still battle for the glamour of being “in Europe”.

In the larger sense, though, being in Europe has never impinged less.

One idea yet to be realised is food-based: Women’s Language Luncheons (needs a snappier name, granted).  Inviting Algerian-born women (keen to sharpen their English) together with English-speaking women who want to learn French; Columbian-born women with those who want to polish up their Spanish; Madeiran and Brazilian women with girls wanting stars on their Portuguese GCSEs.  Perhaps a two course meal, with a change of language at half time?

Visits to Bosnia and Brussels last year (and to Switzerland, Austria, Czech Republic and Germany this year) have encouraged me to try to develop an informal network of grassroots multifaith groups across Europe.  With different historical and trading backgrounds, each European country has its own historic language(s) and also those spoken by its current residents.  If I lived in Berlin, I’d want to be able to say hello and thank you in Turkish.

Religious traditions are often associated with the language of their scriptures.  I’ve been on a crash course in Hebrew – I’d love to do the same for Arabic.  Sanskrit and Ancient Greek are two more.  Latin is not often taught in British schools, but is another with a vast history which crosses geographical borders.

Language, history, religion and the global economy are intertwined.  What does all this mean for communications between grassroots groups across Europe?  Get some funding for interpretation?  Stick to English?  Get everyone going on sign language?  Run some Izzard-style workshops?

mugs from the family kitchen

Sharing experiences/ideas across Europe on just and peaceful co-existence of people from different traditions is as important as it has ever been – Roma communities, laïcité, hijabs/niquabs, freedom of speech, violent extremism, minaret bans, religious discrimination/freedom, far-right movements, hate crime, threats to burn books, lesbian & gay concerns, desecration of graves, Papal visits and “new atheism” all come to mind and I’m sure you’ll be thinking of more.

Each country approaches these topics in its own way, but there are significant knock-on effects: the Swiss minaret referendum prompted a far-right protest against a mosque in north London.  The protesters, Stop Islamisation of Europe, started in Denmark and is now active in the UK.

Instead of threats, stand-offs with the police and fearful communities, we need to work out how we want to live through

Both could be enriched by stronger links across the continent – and for that we need to be able to talk!

I expect we’ll muddle through some exchange visits, send awkward emails and rely, as ever, on goodwill and perseverance (Chapeau! to Eddie Izzard) – but any suggestions on how we go about this are very welcome.

This entry was posted on 27 September 2010 by Catriona Robertson in Europe and tagged #babel, EU, FCO, language, multifaith.