A missed train in Bristol 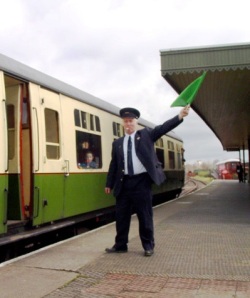 I was catching the 0939 from Bristol on Sunday and was on the platform at 0938.  But British trains are now protected from the indignity of just-in-time types like me.  The doors are locked ahead of departure and the theatre of paddle waving and whistle-blowing by guards is performed to an impotent audience of would-be passengers when there is clearly plenty of time to hop aboard.  To his credit, the guard did seem embarrassed that the train took so long to pull out, so there was an abundance of paddling and whistles until it finally left. 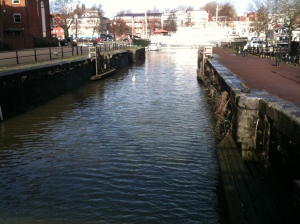 So Bristol claimed me for a few more hours.  I caught a cab to Bristol Cathedral for Sunday Eucharist and, after a traditional service with a retiring collection for Haiti, I headed down to the docks.

Bristol is miles away from the sea – the river must have been jammed with ships during the maritime years.  Bristol – West Africa – West Indies was one of the slave-trade triangles.  There’s a wider stretch which apparently has a deep layer of bones on the river bed – the ships used to throw their dead overboard before reaching the docks.

The Golden Guinea - a fabulous pub in Redcliffe

One of the old pubs (not the Golden Guinea, which has its own particular history) has a couple of look-outs carved into the wall so that pressgangs could be spotted early as they approached.  I talked to three young Somali lads living in Redcliffe – they would be about the target age for pressgangs, but they have their own challenges living in C21st Britain.  Port cities always have international populations and Bristol is still home to people from all over the world.  My taxi-driver was from Pakistan.

The docks are now given over mainly to cafes, yachts, narrowboats and new housing and I was thinking about slaves, the origins of Haiti and the awkward clash of history with leisure facilities in old ports when I met a remarkable young woman.

A Liverpudlian by birth, she has an Irish grandmother – but her grandfather, who died a while back, was from Nigeria.  He was a mariner and worked his way from West Africa to Liverpool in the 50s.  He married there and had six children – way ahead of the curve.

His grand-daughter has inherited his spirit of adventure and is one of those rare people who is thoroughly alive and a joy to spend time with.  She absorbs history as she breathes and plans to find where her grandfather came from – preferably travelling by sea.  Good luck!

I walked back to the station, hoping to stop off at the British Empire and Commonwealth Museum, but it’s closed down.  The café survives (watch out V&A).