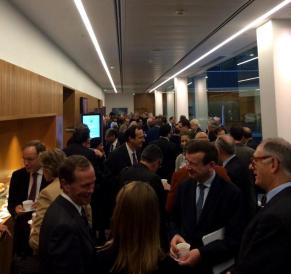 Bercow: the public no longer has confidence that electing their MPs will bring any tangible or practical benefits.  Politicians should under-promise and over-deliver, not vice versa.  They should be honest with voters, especially on complex matters.

O’Neill: evidence-based trust, rather than placing trust in a theoretical way, is the way to go.

The question of trust between Christians and Jews was not addressed, which leaves this important topic for another day.

LUNCH at UCL, near my new office, for their lunch time lectures.

One of my fellow panellists at the Sakharov Debate, academic lawyer Dr Myriam Hunter-Henin, was speaking on Social Harmony and Religious Diversity: is conciliation possible?  To which the only sensible answer, based on thousands of years of history, is yes.

Myriam talked about the ‘burqa ban’ in France and the ECHR’s upholding (on grounds of ‘living together’) of the French legislation.  She contested this, arguing that the social and the legal are not the same, and that an intricate balance of rights between individual freedoms and benefits to society is desirable.

Face-coverings were already disallowed in France (eg if worn by doctors), and the new legislation extended this to all public places.  There was a short but lively debate, including a discussion about the rights of nudists!  Some in the audience questioned whether the rights of minorities should be recognised in law if they conflict with majority views.

It continues to be a hot topic and one fought out over the appearance of women.  Myriam said it would be hard to show that women are being forced to wear face veils – the evidence doesn’t support it. 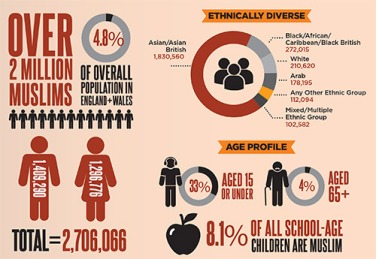 SUPPER last night at the House of Commons for the launch of British Muslims in Numbers by the Muslim Council of Britain.

The Census 2011 figures have been analysed and the room was packed with MPs, journalists, academics, lawyers and community folk.

Religion is often spoken about in terms of belief, but for me it mostly means people, networks & communities, and it was good to hear so many contributors speak about Muslims and mosques taking an active role in civil society along with everyone else.  My work on the co-production of health services in Wandsworth got a mention and my colleague, Malik Gul, spoke at the event.

It was also refreshing to be talking about Muslims in relation to health, homes, schools, jobs and the everyday things that matter to us all, instead of the relentless focus on violent extremism.

There’s a good summary of the report in today’s Guardian.

This entry was posted on 12 February 2015 by Catriona Robertson in UK and tagged British Muslims in Numbers, Council of Christians & Jews, Myriam Hunter-Henin, UCL.