Disquiet on the Western Front

The WWI Western Front in Belgium is heaving with them.  Not real ones of course – they grow on disturbed soil, such as battlefields.  Red poppy logos entice you onto trails, into cafés, onto buses and round museums.  You can get a Poppy Pass, go on a Poppy Walk and buy poppy-emblazoned mugs, lighters and fridge magnets.

Poppies are a British thing – Belgians, French, Germans don’t wear them – so the poppies are for the benefit of the British.

Painted on our B&B bedroom wall: “In Flanders fields the poppies blow . .”  After 24 hours in Ypres, you rather wish they would blow away. 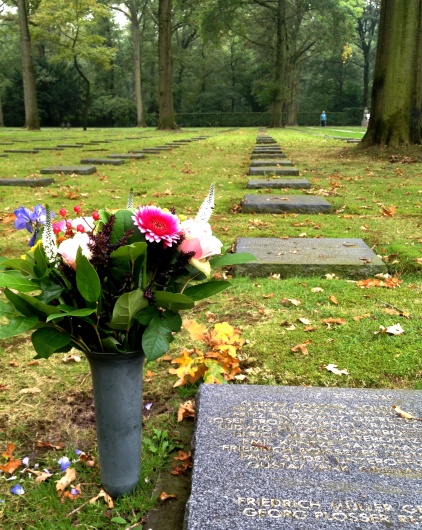 Someone is still putting fresh flowers next to this grave at the small German WWI cemetery at Vladslo, near Ypres.

“Grieving Parents” at Vladso cemetery, sculpted by Käthe Kollwitz, whose son is buried just in front of the figures.

The immensity of destruction & death caused by WWI is both a cliché and hard to grasp. 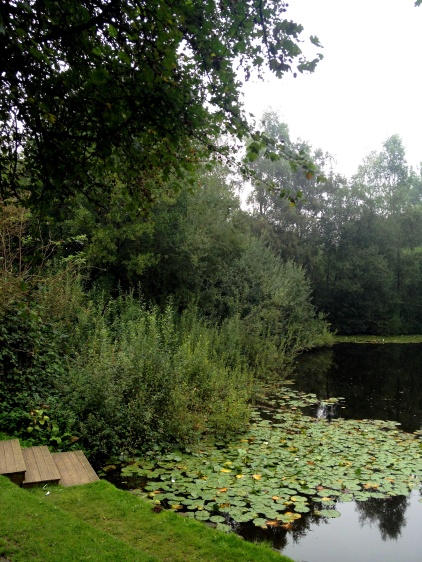 Pool of Peace.  Tunnels were dug to place 19 mines under the German lines and blow them up.  The mines created huge craters. This one was planted with lilies in 1929.

Awash with poppies, overwhelmed by the scale of WWI, people in walking clothes (like me) sip their coffees and try to make sense of it.

One of the reasons, it’s said, for commemorating the Great War is to remember the extent of the loss, the death, so that we don’t enter into future wars lightly.

But how do we respond to the government’s push to commemorate ‘the war to end all wars’ when our front pages are full of current conflicts, many of which have roots in the post-WWI partition of the Middle East?

Without a link to what’s going on now, the poppies-with-everything approach gets trapped in its own bubble, becomes sentimental and loses its bite.

To its great credit, Ypres Cathedral (not a poppy in sight) offers the visitor to the Western Front an opportunity to reflect. 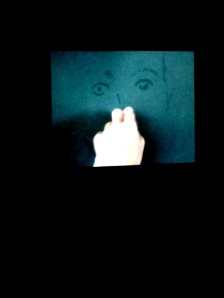 The cloying atmosphere of the town centre falls away and suddenly a different world opens up.

The exhibits are integrated into the life of the Cathedral.

♦ A video of the artist ‘painting’ a face on steamed up glass (which evaporates as it’s being created, needing to be done again, and again) with an old song, Remembering You, playing in the Baptistry.

♦ A wooden carving placed directly in front of an altar.

Untitled by Gilbert Degryse. ‘No one won the last war, and no one will win the next war.’ Eleanor Roosevelt.

♦ Seed pods outside the confessional box.

♦ A wretched body covered by a blanket under the gaze of stone carved saints.

♦ A ‘non grieving angel’ staring out from a mass of human emotion in the choir.

♦ Old Bibles and prayer books on a bookcase (except they’re not).

♦ Rag doll arms in camouflage reaching towards a figure beneath the pulpit.

The juxtoposition of historic “churchy” art (memorials, paintings, statues of Mary, stained glass) with the contemporary pieces sharpens the experience.

This is a brave move and exactly what places of worship should be using their public space for. 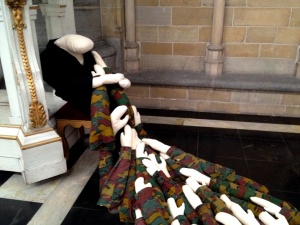 If it’s important for us to tell our stories, to know what we’re about (& art is a good way), we need to engage our current stories with our histories.

The global war of 1914-18 could be helping us understand some of the current interconnected conflicts and Europe’s part in them.

What does WWI tell us about today? Paying our respects to those who died may involve staying with uncertainty, discomfort, disquiet.

For a richer ‘visitor experience’, the WWI commemorative industry could be asking us questions and getting us thinking and talking.

Not just ‘Wasn’t it awful?’ but ‘Why is it still happening?’ and ‘What is our role now?’