What are your thoughts on UK military action in Syria?  Chances are you have an opinion one way or the other.

While I was at Greenbelt last weekend, the Prime Minister was wondering which way to lead the country: support a military response by the US?  Or what?  Parliament was recalled.

I’ve travelled through Syria and remember many convivial conversations in Damascus: the people we met were well informed, had an acute sense of history and were rightly proud of their city’s capacity for accommodating a wide range of cultural and religious traditions. 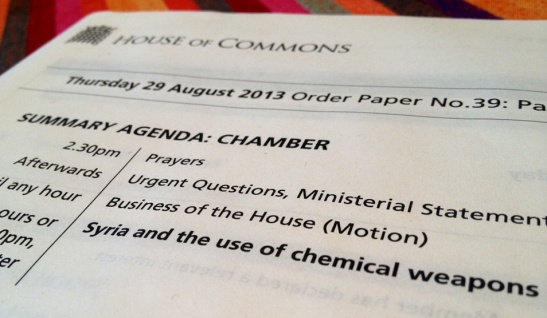 I went to the House of Commons on Thursday evening.  The public gallery was virtually empty.   Both the government motion and the opposition amendment were variations on ‘wait and see’ and neither of them were carried.  I heard Labour MPs in favour of military action and Conservative MPs on their grave reservations.  It was an honest debate, mostly free from party politicking, and it was clear that neither side of the House had been whipped.

I didn’t expect the amendment to succeed, but neither did I expect the government motion to fail.  When it did, there was an odd quietness and unease across the whole chamber – not the usual roar.  My own MP, Chuka Umunna, said the House was ‘stunned’ by the result.

My good friends at the Christian Muslim Forum had put out a timely statement earlier in the day, acknowledging the history of the region and urging restraint.  “We also call for a new emphasis on peace, and the speaking of peace, in international relations; nation states in the 21st century should be speaking to each other . . .”

There was plenty soul-searching in the press and online yesterday – if no military action, then what?  Do we walk away from the use of chemical weapons?  Is it none of our business?  Is this a turning point in British foreign policy?  Many of us struggled to articulate what the UK should do, given Syria’s position within a complex web of alliances and enmities.

The thoughtful Conservative MP Rory Stewart wrote, “Thursday’s vote in the House of Commons was both moving and troubling.  Britain has learned the lessons of Iraq, but it’s in danger of over-learning them.  The alternative to grand interventions should not be simply inaction.”

As it happens, I was part of an Open University workshop in new media in the East End yesterday.  Our field trip  to try out new software went past Brick Lane’s Jamme Masjid (at around the time of Friday Prayers) and on to Spitalfields Market.

Still in a Syria-haze, one of the market stalls caught my eye.  Flowery garlands to wear around the head are popular for girls and young women in the summer, but the stall was empty and the circles hung disconsolately, swaying slightly in the breeze.  Perhaps it was the hanging from meat-hooks or the echo of funeral wreaths, but it seemed to say something about the sadness of young lives taken and the emptiness of an inadequate response.

I met Ban Ki-Moon last year and he seemed to me to be a decent man in an impossible job.  The failure of the UN’s Security Council to act over Syria is lamentable.

I used every new app from the workshop to interview passers by on the previous night’s vote.  Of those who agreed to speak, some were in favour of military action, some weren’t – but everyone had an opinion and everyone wanted the violence to stop.

On my way to the tube home I called into the Whitechapel Art Gallery.  The Spirit of Utopia is inspired by Ernst Bloch’s post-WWII Principle of Hope – Who are we? Where are we going? What are we waiting for?  “Ten artists and collectives from around the world speculate on alternative futures for the economy, the environment and society itself, asking, ‘what if?’”  I took part in Pedro Reyes’ work, Sanatorium (playing Goodoo, a positive spin on Voodoo), which borrows from the idea of sociatry – the science and art of healing society.

The growing plants, live pottery making and kindly attention of the Sanatorium artists reflected what I had found on the street – ordinary British people do care, even for people in far-off lands and in circumstances hard to relate to.

My friend Steve Miller (second from right above), who founded the Jewish international development charity Tzedek, was one of the speakers at Greenbelt.  On global injustice, he said we need to learn more about it.  The reasons for extreme poverty are complex, structural and systemic – if we don’t understand this, our efforts to address injustice will be piecemeal.

The same goes for international conflict.  How are we to understand the situation in Syria without knowing about the Great Game, the post-WWI drawing of national boundaries, the religious and colonial history of the region and the current economic and geo-political pressures?

So, who cares about Syria?  Well, quite a lot of us, it turns out.

And a lot of us is what it takes to bring about change.  But what do ordinary people do?  What’s happening where you are?

It’s energising to do something practical – we are contributing to the Big Aid Drop for Syria today and are fortunate that there’s a collection point just down the road.

Using the democratic process (and Thursday’s parliamentary debate highlighted the importance of this) is another possible pathway, even if it’s just an email to our MP.

Pressure on the UN, possibly via a local UNA, is another way to learn more and join together with other voices.

There are many humanitarian relief agencies active in Syria:

All of them have Syria splashed across their front pages.  Many of them give background information.

Lastly, in the spirit of Bloch, our own lives can demonstrate what we hope for – to be the change we want to see, to work for the common good, to speak about peace and about justice, and to forge friendships and partnerships across political, economic and world-view/religious divisions.  The Christian Muslim Forum is one of many groups engaged in this.

Anyone who has ever shared a flat or been part of a family knows this isn’t always plain sailing and we fail and fail again every day.  But, as Beckett said, we fail better.

PS Here is the huge pile of donated humanitarian supplies given to Hand in Hand for Syria by Brixton people today – with Hannah Dudley (not just wearing the t-shirt but helping to organise it all).