After hearing Nick Clegg speak to a multi-religious audience on Friday, I went down to Woolwich.

I attended Juma prayers at the local mosque, bought a peace lily at Tesco’s and went to the place outside Woolwich Barracks where British soldier Lee Rigby was killed, in a particularly gruesome attack, two days earlier. 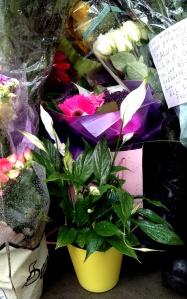 Peace lily in memory of Lee Rigby from LBFN

The peace lily, on behalf of London Boroughs Faiths Network, joined hundreds of other flowers around the railings and in spite of the pouring rain people kept arriving to pay their respects.

I was with two Muslim friends who laid flowers in memory of the young Fusilier – Julie Siddiqi for the Islamic Society of Britain and Dr Shuja Shafi for the Muslim Council of Britain.  Another friend, Siriol Davies, who works closely with several mosques in south London, also laid flowers.

Although the media swirl has revolved around Islam and terrorism, the video footage (previously on the BBC website, now on the Sun’s) of one of the assumed killers speaking to onlookers leads me to further questions.

He is black (of Nigerian origin) and his south London voice sounds familiar and like many other disaffected boys and young men, from different religious backgrounds, that I have met over the years.

What he says suggests a huge gulf between him and mainstream society.  Addressing fellow Britons, he distances himself from us by making a distinction between ‘our’ and ‘your’.

“I apologise that women had to witness this today, but in our lands our women have to see the same . .  Remove your government . .”

“Tell them [the government] to bring our troops back so we can – so you can – all live in peace.”

Does he consider himself part of the “we” of British society?  It doesn’t sound like it.

A caller to Radio 4’s PM programme said of  the suspects, “They just don’t belong here.”  Two callers to yesterday’s Any Answers echoed this, with one saying British Muslims should all “quietly leave the country”.

To wish that any group will disappear is to be on a dangerous track.  Tell Mama, which monitors anti-Muslim attacks, reports a huge surge this week in hate crime against Muslim people, including personal attacks and violence against mosques.

Feeling invisible, redundant, rejected and disposable is not uncommon amongst some of the boys and young men I’ve talked to, particularly from African and Caribbean backgrounds.  Discrimination, disproportionate rates of mental illness and involvement as victims and perpetrators of crime attest to a life of struggle.  Try as they may, their experience of education, policing and job opportunities often thwarts them.

Do they feel they belong?  A sense of belonging is essential.  If acceptance and acknowledgement don’t come to you, it’s likely you’ll seek them out.  Criminal gangs and ideological extremists welcome such young men with open arms.

There can be no special pleading for the perpetrators of Wednesday’s horrific murder.  They must bear the consequences of their actions.  Piecing together the jigsaw of what led to their deep alienation, however, must be a priority. 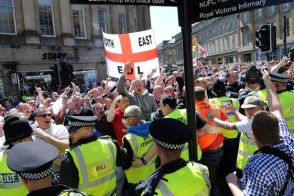 When I observe English Defence League protests with the police, it strikes me that for many of the protesters (mainly men) the demonstrations are possibly the highlight of their lives: meeting up with friends in common cause, plenty of attention, escorted here and there by police officers, everyone watching and listening, a bit of extra attention (arrests) when the racism turns violent, ending with a few drinks in the pub and an escort home.  Far from being nobodies, they are suddenly, for one day, somebodies – they’re visible and they belong – you can see it on their faces.

How do we close this gap and support belongingness of a positive kind?  How can we involve young people in building society, sharing common cause, in which everyone is valued, in deed as well as in word?  What needs to change so that boys and young men, whether they are white or from African, Asian or Caribbean backgrounds, whether Muslim or not, have the same chances – at school, at work, in civil society – as the rest of us, so that they’re comfortable in their own skin and in their own (my own) country? 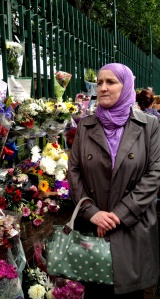 For those of us who already have a sense of entitlement, a sense of purpose within mainstream society – why aren’t we sharing this more widely?  What doors need opening, horizons lifted, blinkers removed?  Any re-jigged Prevent Programme needs a far more holistic approach.

More positively, there has been an overwhelmingly strong response across religious communities condemning the murder.  No longer can people wonder aloud why Muslims don’t distance themselves categorically from such atrocities; there has been a steady stream of imams, scholars and Muslim organisations issuing press releases, video statements and arranging photocalls.  This has been supported by multifaith groups and the Archbishop of Canterbury.

In time we will hear more about the two men who carried out this brutal murder and we will continue to hold the friends and family of Lee Rigby in our thoughts and prayers.

At the moment, demonstrating solidarity with Muslim friends, local Islamic centres and offering support is top of the agenda.  Let me know if you’re unsure who to contact.

We could do worse than follow Russell Brand’s advice

How futile their actions seem if we instead leave flowers at each other’s places of worship.”

6 comments on “Woolwich, alienation and belonging”