Twelfth Night.  The decorations are down and I’ve been collecting up the cards.  Always amuses me that staunchly atheist friends send cards with religious themes (angels, wise men, Flights into Egypt) and Christian friends, including clergy, often go for snowy scenes, plucky robins and left-field oddities.  Fewer home-made ones than usual (including our own) this year.

Here are my top 2012 cards.  I’ve particularly appreciated the ones from Muslim friends.  When Eid comes around this year, I think I’ll send more than the usual few.

London taxi in the snow from one of my husband’s colleagues.

A Cameron Highlander from old family friends. A reminder of my birthplace: a Scots pine, loch and mountains.  The pipes were played at Saturday’s rugby match every time London Scottish scored a try – piping’s far from an anachronism, though still best played outdoors.  A new World Peace Tartan was created last year – keen to track down a scarf.

Knit for Peace brings together women from traditionally hostile communities to knit for each other’s needy children, babies and elders. Good stuff.  From a local friend – I don’t think he knits. 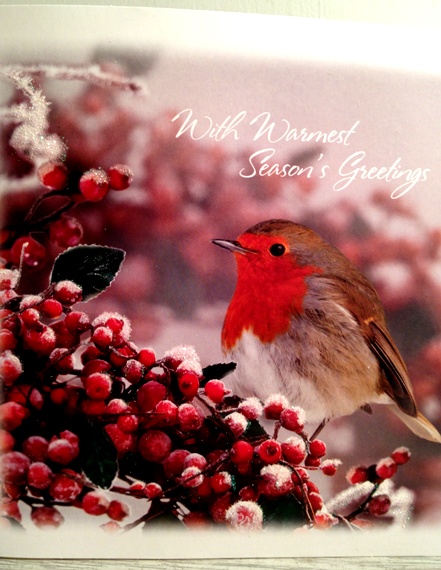 From a dear Muslim friend and his family – we’ve worked together a lot over the years, including post 9/11, 7/7 and on Olympic Truce projects.

From Amelia at Simoon Travel who helped us get visas into Libya in 2006.  Candles at a C10th church in Uplistsikhe, Georgia. I’ve seen slim candles like this pushed into sand across North Africa and the Middle East.  I’d like to visit Georgia and to hear the strong sacred chanting in the churches there.

From an old colleague, a card supporting Survival International, which works for tribal people’s rights. These are Dogan nomads stacking their wood for the night in Siberia.

Drawn by the granddaughter of an 88 year old friend I’ve known since childhood: remarkable man & I learn from him still.  I like Mary being astride the donkey – almost impossible to stay on sidesaddle.

I’m off to Brussels tomorrow (Monday) for the first ENORB meeting of the year.  The website has been updated.  If you have any European news of religious and non-religious people working together for the common good, let me know.

This entry was posted on 7 January 2013 by Catriona Robertson in UK and tagged Christmas cards.