Yesterday I joined one of South London Inter Faith Group’s walks.  It included the Bevis Marks Synagogue (the website has a beautiful soundtrack). 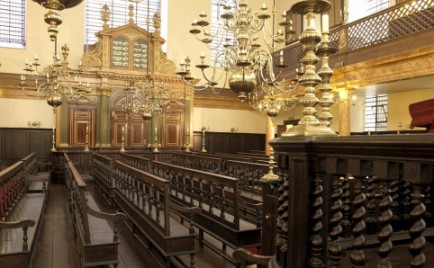 Bevis Marks Synagogue has the longest unbroken history of worship of any synagogue in Europe. Sephardic Jews, expelled from Spain and Portugal after the Reconquista, found refuge in the Ottoman Empire and in Amsterdam. England also threw out its Jewish communities for 300 years, but when these laws were set aside in Oliver Cromwell’s time, Jewish traders from Amsterdam were some of the first to arrive. The mother synagogue of Bevis Marks is the great Spanish Portuguese Synagogue in Amsterdam.  We were invited to visit at Yom Kippur, something I’ll consider.

On Saturday evening I was at the Open Talmud Project on an inter faith panel, speaking (as a Christian) about social justice.

The Open Talmud people (all in their 20s & 30s, on squashy sofas & floor cushions) were relaxed, welcoming, seriously studious and funny.

I took my Iona Community booklet to read out the Rule for full members (it’s demanding; I’m just an associate member).

Perhaps I wasn’t surprised, but I was happy to see that my Muslim counterpart was Mohammed, an erudite scholar and someone I’ve met at interfaith gatherings over the years.  Although London is a massive city, maybe there aren’t that many of us who get about, cross boundaries, do this kind of thing – especially with local groups.

An engaging Talmudic scholar from Israel and a British Quaker activist completed the set, ably chaired by Benji, a trainee rabbi.

The discussion ranged from how religion inspires us to act for social justice (or prevents us), to the tension between religion as a movement and religion as an institution (which is fresh in my mind from my networks presentation to the Inter Faith Network last week), to whether we should get political (yes, but the available choices don’t seem that attractive, or clear, at present) and how/whether we should engage with atheists, especially those who dismiss religion.

It was great to be with an outward-looking religious group as it thought aloud and worked through some “How do I live?” questions – not in some sentimental, pious way, nor abstracted and remote, but drawing on history, scripture, their own and other people’s experiences.

This entry was posted on 16 July 2012 by Catriona Robertson in London and tagged Judaism, Open Talmud Project, social justice.