Suits not boots? The far right in Europe

A matinee idol is how the Vienna Review described Heinz-Christian Strache’s appearance on campaign posters in June last year.  His Freedom Party went on to win 27% of the votes in Vienna’s October election.

Well dressed, articulate and on the rise – continental Europe’s far right leaders produce slick and sophisticated material.  BBC Radio 4 has a two-parter Driving on the Right and this Tuesday’s programme (4pm) will cover Austria and Germany.

Last week the focus was further north.  A Mexican, who has lived and worked in Denmark for 8 years and is married to a Dane, is finding it impossible to obtain a permanent residence permit.  The new regulations have been brought in under pressure from the Danish People’s Party, who hold the balance of power in parliament.   In Sweden, a member of the Sweden Democrats took the BBC reporter to a part of town with a higher proportion of Muslims, but stayed in her car – with her two Great Danes – out of a mixture of reluctance and fear.

Concern over migration to Denmark and Sweden (in particular by Muslim migrants), a perceived lack of integration and pressure on welfare benefits, and what came over as a sentimental longing for their culture to stay the same seemed to be at the heart of the populist parties’ appeal.

It wasn’t clear how these two countries welcome new arrivals nor what opportunities there are to become part of Swedish or Danish society. 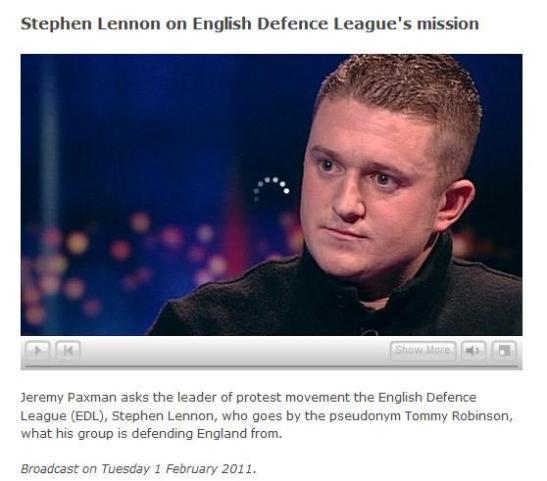 The leader of the English Defence League, Stephen Lennon, was interviewed on BBC TV’s Newsnight before the EDL’s protest in Luton on 5th February.  EDL protests have a history of violence – boots not suits – and their followers are not generally described as matinee idols.  Jeremy Paxman’s rather sneery interview manner pointed up the class gap between the likes of Paxman and the EDL’s membership; it did little to tease out what Lennon’s underlying concerns were or why a whole raft of worries – from crime to the protection of gay and women’s rights, drugs, terrorism and prostitution – appear to be fixed only on ‘militant Islam’, rather than the usual wide and complex range of wicked issues that exercise policy makers.

The Swiss referendum on the building of minarets and niqab bans in other parts of Europe have knock-on effects in the UK, but we have yet to see much mainstreaming of far right politics: the British National Party’s seat in the European Parliament is about it.  Nick Griffin, the BNP leader, may be a hero to his followers but has very little credibility as a national politician.

It is hard to imagine anyone in the UK taking seriously someone who waves a large cross at a proposed site for a new Islamic centre – but Heinz-Christian Strache has found it a vote-winner in Vienna.

So why are significant numbers of voters across Europe falling for it?

I was talking last week to someone who works ecumenically in Nordic, Baltic and other European countries.  His view is that when Christians become less confident in their own faith they are more susceptible to feeling threatened by people with a more secure and informed identity.  So insecure, ‘cultural’ European Christians find it difficult to accept Muslims from other parts of the world – who seem to be more confident in who they are and why they live the way they do.

If this is true, it could also be true of people of any religious or philosophical tradition – a received set of values, whether religious or not, is not as useful as a worked-through, fully-owned religious, ethical or moral position in being able to relate positively to people from a different tradition.  The differences (perhaps because between two known positions they are measurable) are therefore seen to be rather small in comparison to all the commonalities, and appear less significant.  If you’re not quite sure where you stand, the distance may seem that much greater and even unbridgeable.  It might also prompt you to define your own identity in relation to the ‘other’, rather than in a more rounded way.

Listening to the Danish politician on the programme speak about the necessity of listening to far-right concerns and responding to them, rather than dismissing them out of hand, I hope that Newsnight’s next interview with the EDL rightly condemns the violent protests, but engages more fully with their concerns.

Euroblogger Jon Worth has written an informed reflection on the programme, Nordic politics and culture which is well worth a read.

The next programme is on Radio 4 on Tuesday 15th March at 4pm.

8 comments on “Suits not boots? The far right in Europe”