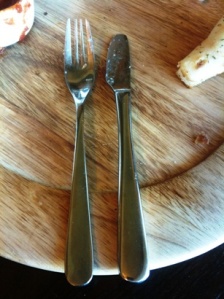 A fab birthday treat – a weekend in Vienna :)

This time (last visit was July) I had the brilliant company of my husband (WWI, second hand books, Freud).  I doubt I’d have visited the Museum of Military History if he hadn’t suggested it.  The WWII rooms are harrowing.

On Saturday morning, the Kunsthistorisches Museum café produced a sausage and grated horseradish breakfast which sustained us through most of the day (was absorbed by Breugel’s Babel having seen David Mach’s Babel Towers at the Royal Academy this summer).

Service sheet for St Ruprecht - loads of music for everyone

Later I called in to St Ruprecht, a beautiful little church tucked away in its own courtyard in the old town, and heard singing – they were having a run-through before the Saturday evening service.  So I stayed.  I thought I’d been given the wrong service sheet because there was so much music printed on it – but no.

In an odd way, it was very inclusive – I have about four words of German, but I could join in most of the service this way, singing along with everyone else.  Lay women took as prominent a part as the lay men and (little) children carried candles up to the altar at the offertory – there was a bowl of sand for them.  Communion was shared with everyone gathered around the plain stone altar and the bread was substantial, unleavened, chewy stuff.  It was a heavenly combination of my old parish church, St John’s Clapham (which was so brilliant at involving everyone) and an Iona Community service – at the Abbey or anywhere else.  I felt wholly restored.

The Anglican/Episcopal Church has a branch in Vienna and I joined them on Sunday morning.  Their magazine, Crossways, had a piece on Jewish-Christian activities.  The congregation is involved in a Vienna city initiative to encourage people of different religious traditions living in each district to get to know each other – just ordinary people, not theologians or religious leaders.  One member of the congregation most involved in this told me one of the best ideas I’ve heard of yet – add a short sentence to each church’s, mosque’s, temple’s, synagogue’s noticeboard saying that everyone of whatever faith or none is welcome to come inside and meet the people there.  If we were popping in and out of each other’s places of worship and atheist/humanist association’s premises we would soon get to know each other.  The last event for this district was a visit to the local mosque and the next is tomorrow evening, when they’ll be visiting the local Polish Church. 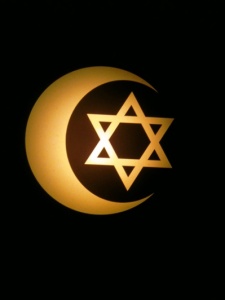 I met my husband for a dreamy slice of über-light cheesecake at the Jewish Museum.  There’s an good exhibition on at the moment Turks in Vienna which traces the history and geography of the Sephardim from 1492 onwards.

It’s pretty much a potted history of Europe over that period – the jigsaw of empires and alliances, the Habsburgs and the Ottomans, and a salutary lesson in who provided refuge, who did not and how overlapping allegiances enabled the Viennese Jews to act as go-betweens across the different cultures – East and West, Orient and Occident, Asia and Europe.

Sculpture by Hrdlicka at Albertinaplatz

The second time I passed the Hrdlicka sculptures at Albertinplatz I noticed a fresh rose had been placed on the strong, sad depiction of a Jewish man scrubbing the streets.  Nearby there is a monument with a declaration carved into it from 1945 which includes “the freedom of all religious traditions”.  The place still seems a bit of a walk-through rather than a destination.  I found a young Hungarian graphic artist there.  He produces some great cartoons – Amy Winemouse, the Zion King – and it was a pleasure to meet him.

Just like Sarajevo - Turkish coffee at the Jewish Museum, Vienna

I found out too late that there was a Klezmer Festival on – I love it.  The Austrian Folk Song Society has heaps of information – it used to collect folk music from all around the empire, but now collects from within Austria itself, including its minority cultures.

It’s an odd mix, Vienna.  Plenty of intercultural initiatives and good people involved – but the FPO (Freedom Party of Austria) polled 27% at the local elections in October.

The English Defence League were busy yesterday in Preston and Nuneaton and it’s hard to see anything as crude as this building momentum in the UK – but it’s as well to make sure it doesn’t.  Hats off to Hope Not Hate and other campaigners.