Thoroughly enjoyed Istanbul.  Friendly, upbeat & vast, with multiple layers of history and identity.  It was good to see people from along the Silk Road mixing in with everyone else.

Proper heating keeps everyone warm, even in the trams and on the ferries (nota bene Caledonian MacBrayne).

People I spoke to seemed fairly relaxed about intercultural relations in the city, although it’s a shifting scene.  The Syrian war doesn’t help and Gezi Park, scene of the 2013 anti-government protests, had a police presence.  Some people feel there’s a changed ‘mentality’ which is leading young people to find work abroad.

There doesn’t seem to be anything formal between muftis, rabbis, humanists and patriarchs, but ordinary folk are getting together intentionally.  I bought a CD in Hagia Sofia (every ex-cathedral has a gift shop) featuring Alawi, Jewish, Sunni and Kurdish musicians – swooping pentatonic vocals and intricate oud.  Lovely stuff – see/listen to the videos at the end of this post.

Many thanks to Debbie Damon (thinking of you this weekend!) for the inside track on visiting Istanbul.

Lighting shop (Istanbul is full of chandeliers), with shopkeeper in the background. 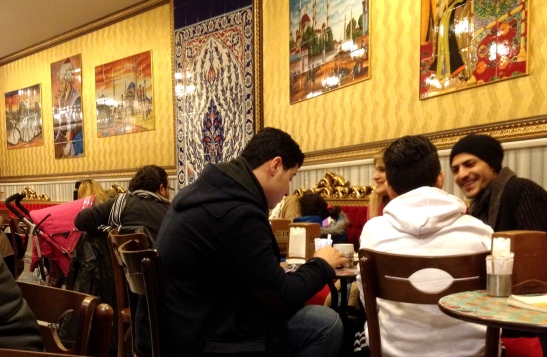 Rooftops of the outbuildings of the Suleymaniye Camii, looking over the Golden Horn to Galata Tower and (on the right) over the Bosphorus to Asia. Extensive mosque outbuildings used to house schools, hospitals, libraries & kitchens to feed the poor.

Drinking water at the Sublime Porte, for hundreds of years the entrance to the epicentre of the vast Ottoman Empire’s government.  Istanbul has exquisite taps (that still work) and this is my favourite.

Sweetmeats at the Hafiz Mustafa café. 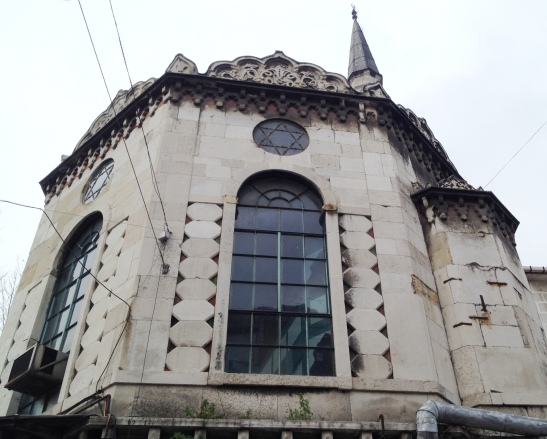 Star of David circular window & minaret behind: this used to be a synagogue & is now a mosque, with a kiosk café on the ground floor.

The old district of Pera: hilly Montmartre meets historic Palermo.  Not all the old houses have been renovated – oriel windows like this are common. 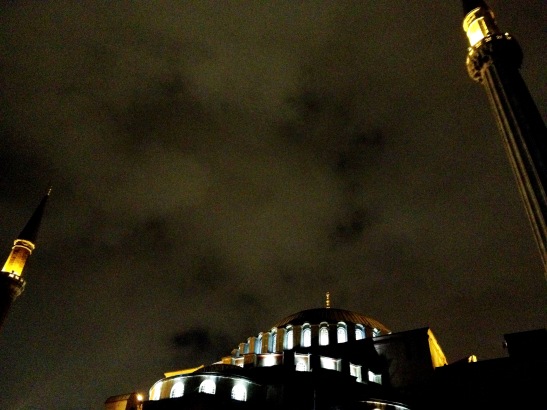 Hagia Sophia (Holy Wisdom), at night.  Holy Wisdom appears in the Hebrew scriptures (Hokhmah), is closely identified with God and is consistently female.  “When he established the heavens, I was there.” Proverbs 8:27.  Hagia Sophia was a church 537-1453, a mosque 1453-1931, & is now a museum.

Hagia Sophia has huge buttresses to support the dome and add-on buildings all around.  It was the largest cathedral for nearly 1,000 years. 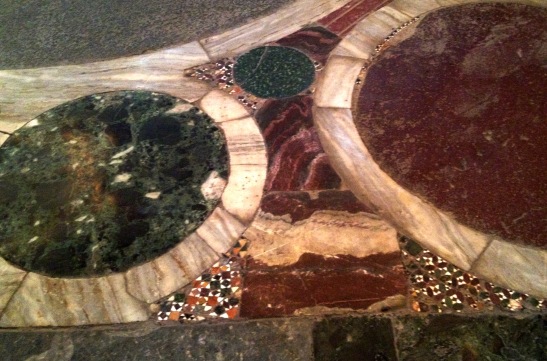 Marble floor in the part of the nave where Eastern Roman emperors were crowned. Reminded me of Westminster Abbey’s C13th Italian marble Cosmati pavement. 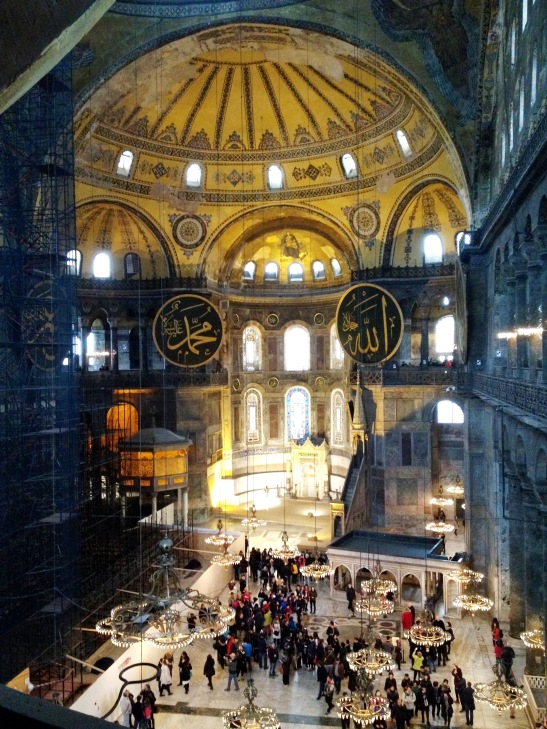 Now that Hagia Sophia is a museum, people wander around on foot, their voices absorbed by the huge space, much like it must have sounded in the C6th.

A churchwarden’s nightmare – loose tiles.  Or, in this case, broken marble, on the floor of Hagia Sophia’s gallery.  They make a tinkling noise when you step on them. 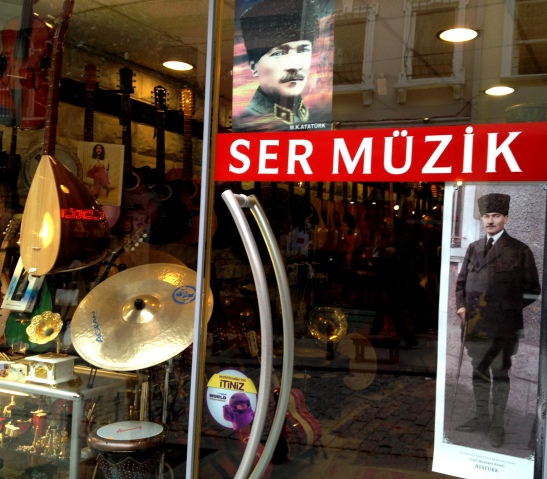 Turkey’s hero founder Ataturk on the door of a music shop.

Fake US dollar and Euro notes for sale in the market, next to the honey sticks.

Ashkenazi synagogue in the Pera area.

Neve Shalom Synagogue, near the Galata Tower. When asking directions on the street, I met its organist (we spoke in French).  I heard people in cafés speaking a mix of Turkish, French & English.  In Damascus & Cairo I’ve heard a mix of Arabic, French & English.

A sure sign that you’re heading east – slim prayer candles in sand rather than tealights or short candles on a stand. These were at the Anglican church. Acapella choir & a warm welcome from the priest and congregation.

Marble basin and brass taps in a cake & pastry café. 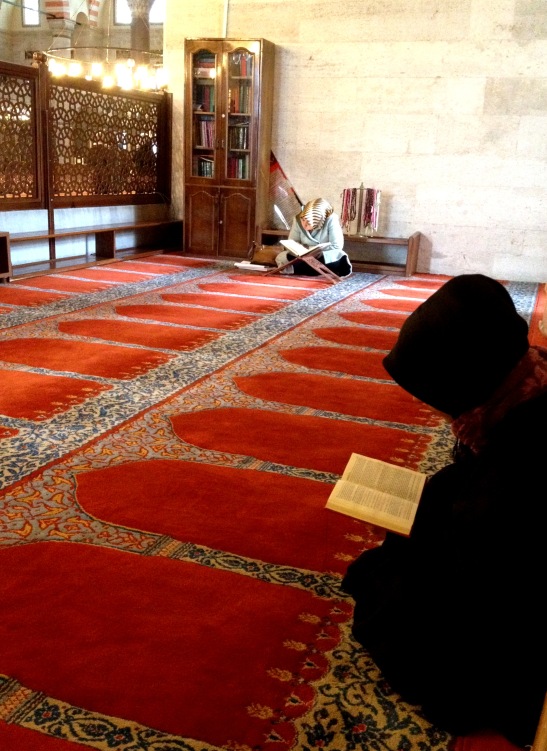 Studying in the women’s part of the Suleymaniye Mosque.

I got talking to these two gentlemen from Karachi, Pakistan, who were also visiting Hagia Sophia.

Underground water tank built by Emperor Justinian in the C6th.  James Bond visited in From Russia With Love. 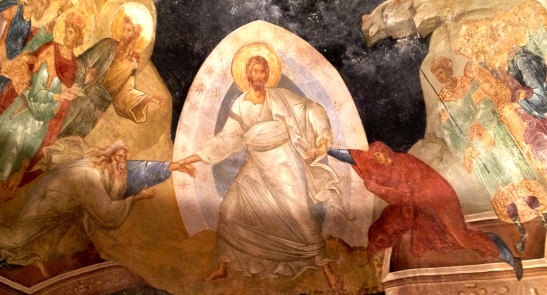 Unusually active & muscular Christ, tugging Adam and (especially) Eve out of their graves.  Fresco in a stunning Byzantine church (now a museum) in Chora, Istanbul. (The uplighting casts a shadow.)

Wah-wah packaging in a music shop.  Ouds hanging in the background. 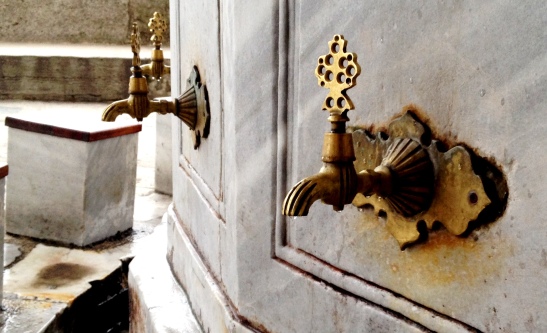 Taps for washing at the Iskele Camii. 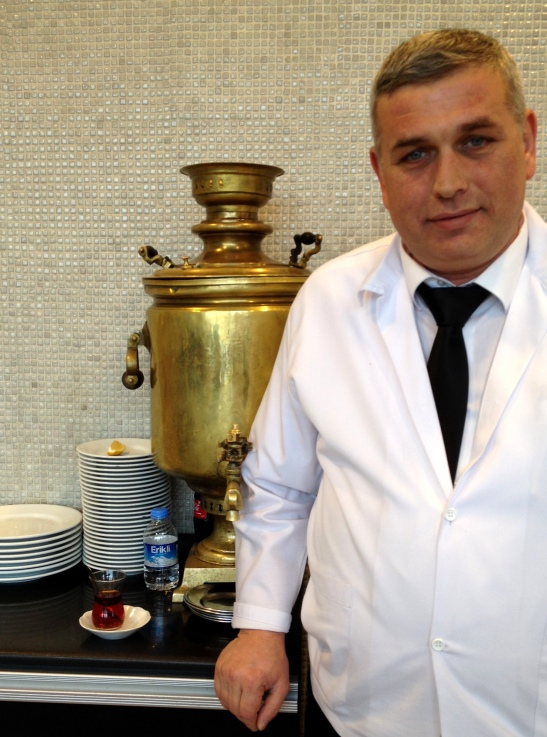 Samovar in a lokanta (swift service lunchtime restaurant) on the Asian side of Istanbul. Hot, gloopy, rose-scented salep was also served from samovars on the street at night. Reminded me of the samovars in Iran.

Here’s a clip from the Pera Lounge CD, followed by a short film on the Pera Ensemble which brings traditional music from different traditions together, including Assyrian music.

This entry was posted on 17 March 2015 by Catriona Robertson in Turkey and tagged Hagia Sophia, Istanbul, Ottoman, Pera.